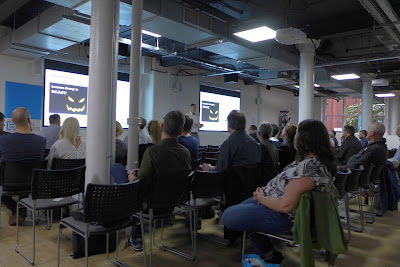 It was a busy week for me this week with two meetups that I was planning on attending. The first was on Tuesday over in Manchester hosted by Equal Experts on agile transformations.  The weather was horrendous although it brighten up by 4pm. Drove off to Burscough Bridge station on the Manchester line, bought my ticket only to be informed that the train to Manchester was cancelled. Suggested that I could get a different train on a different line if I drove to Bursough Junction station so off I went. Found out when I got there that this particular train was also cancelled and that I'd have to drive to Wigan to ensure that I could get a train into Manchester. I had planned on being there around 5:30 however I didn't get to the meetup until just after 6:30. This meant that I'd missed the drinks/food/networking that occurs before the talks and walked in with the first talk already in progress!

Obstacles of Digital Transformation Evolution - Ryan Bryers
Ryan's talk was on the challenges that you will face when you try to bring a large transformation to bear within an existing organisation. He discussed resistance to change, and how the people and the culture is key to enabling a positive transformation. It was quite a high-level talk and so I didn't take many notes, luckily the presentation was being videoed so you can watch Ryan video below (his slides are also available).
Following a short break where I did managed to get a spot of delicious vegetarian Indian-style food but ended up with no time for any networking which is a big shame as I had planned on meeting Emma from Codurance but didn't get the chance. 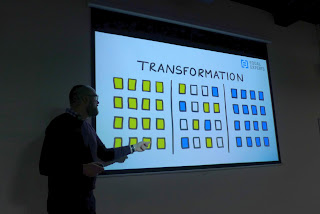 David's talk was on how he was tasked with taking his company through a major transformation and how he dealt with it. There was talk about don't aim to fail fast but if you do that's ok, agree a common understanding of agile (due to there being so many strands of it). Lots of talk about listening to people and trying to understand where they are coming from, and keep digging to get to the root causes of pain and suffering. 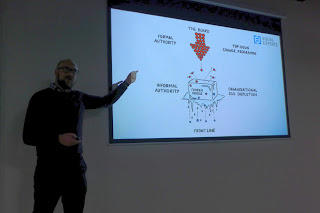 I wish there was a video of the talk available because my brief notes above do not to the talk justice, it was an excellent talk and David's empathy and determination really came across. Out of nine different workstreams assigned to make change, David's was the only one to succeed, he was then put in charge of all nine workstreams, quite an achievement!  David's slides are available here.


The evening was over pretty quickly once David finished his talk which was a bit of a shame as I would have liked to spend a bit of time talking to the presenters and meeting some of the other attendees. Also the room was rather dark so although the presentations were very clear, it was difficult to see the speakers clearly (and it meant my photos were rubbish).  Over 200 people had said they were attending the event whereas I did a quick headcount and maybe counted 60, this is really bad as it means that Equal Experts potentially had to cater for far more people than actually attended. I think as meetup members we need to be fair to the hosts and sponsors and make sure that if we can't make it that we 'say so'.