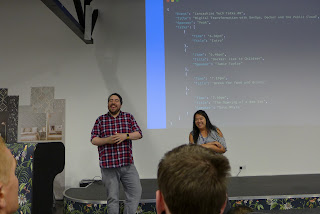 The 26th September saw the return of Lancashire Tech Talks a meetup group run by Andy Norton and HoiYen Sihapanya in Blackburn. The topics were Docker and migrating to the cloud. HoiYen has been involved with running all eight of the meetups and as I've recently taken over the Liverpool Software Architecture meetup I was keen to pick her brains about how to run a successful meetup evening. 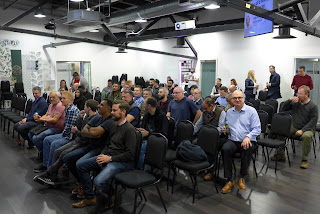 Some beers and soft drinks were on ice when we arrived and lots of people were stood around in small groups catching up with old work colleagues or just networking to make new friends.  After a brief introduction and run through of the format of the evening it was time for the first talk. 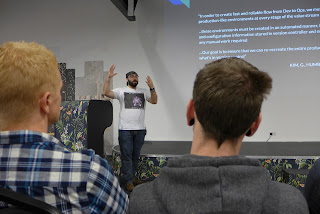 Jamie's talk was on DevOps and Docker. He ran through where DevOps has come from, explaining about the Toyota Production System, Kaizen and The Three Ways as techniques to help speed up learning and improving processes.  Next he moved onto explaining what Docker was, that it uses containerisation and will run on Windows as well as Linux. He explained about how Docker containers can be networked together, that you write dockerfiles to configure them and how they can be secured as well. You are probably best off reading through his excellent slides slides which have loads of notes as well, available here.

Next was a break for food, a large selection of massive 14" pizzas, the pepperoni and tandoori chicken one was excellent, tasty with a real nice spicy kick to it. I got a chance to chat to Carl Whalley who was interested in replacing his aging Windows VMs used for camera control software with Docker containers. I also got to catch up with a couple of my remote colleagues, Mark Wickens and Calum Shaw-Mackay. We speak to each other every day but rarely get a chance to meet face-to-face.


The Dawning of a New Era - Dave Whyte 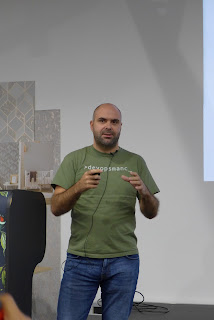 The next talk was from Dave Whyte who is the Operations Lead at AutoTrader. Dave's talk was amazing, he detailed the transformation from traditional long development time projects with infrequent and problematic deployments through to doing hundreds of deployments a day. He talked about what kind of people and culture are required as well as detailing some of the tools they built and use in order to achieve such agile delivery. I've found Dave's talk on the same subject from a different conference so why not what it for yourself? (Dave's slides are available here)

Yet another excellent evening by Lancashire Tech Talks and thanks to Andy & HoiYen for organising, and Graham & Brown for hosting.