It was a busy week for me last week with both Wednesday and Thursday evening spent at meetups. Wednesday's was the North West Tech Talks meetup hosted by AO in their very cool building over in Bolton. It's a bit of a trek from Ormskirk and due to traffic took me over an hour to get there but it was well worth it, the content and speakers were great as was the food! 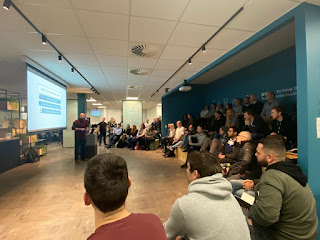 I had two reasons for making the trip to this one, first was the good content listed for the evening but secondly my other remote colleagues were going so we could spend a little face-to-face time together rather than just speaking on the phone. After about thirty minutes to get a drink (beer, wine, soft drinks) and mingle a little it was time for the first speaker.

How the heck do you manage half a million devices? - Peter Egerton

First up was Peter with his suggestions on how to be able to correctly manage content distribution to a huge number of devices in multiple regions whilst not failing and ending up in the news. You need to be using the "right tools" - use the best applications, get the right skills, get the right people and get yourself a lab so that you can try the deployments out in a non-production environment. 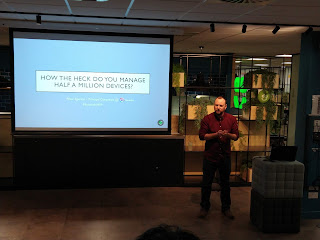 "bulk up, but stay lean" - You need good hardware whether that is on-prem or using cloud facilities. If you are in the cloud then you need to be thinking about regions and availability zones, not only for coverage and latency but also for disaster recovery. You need to be kind to your database and cache commonly accessed stuff so that it's not being hammered by thousands of devices at the same time. Spend money on boosting performance rather than trying to tidy up after an issue, it's cheaper to spend money on up-front performance compared to the human administration costs of investigating and fixing a performance issue. 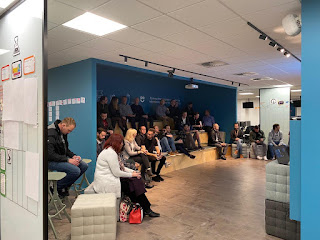 "get clever" - sometimes an unsupported solution may be required. You should be considering how to pre-stage content to get it close to your audience before rollout, and trickle it out rather than go for the "big bang" approach. Send out only what you need, and Microsoft now support peer-to-peer distribution. You also need to phase your deployments so that if it fails for some reason you can roll it back without it affecting the entire suite of devices.

"stay safe, not in the news" - own the solution and have a core team who understand the product. Use role-based access to control what security is required and who should have access.  Use approvals on deployments to ensure the business understands and agrees the impact of this rollout.  "Nail the CAB" - (Change Advisory Board). Standardise the process and ensure you keep everything up to date (OS, DB, apps, etc.) if you are out of date, your support contracts will be useless. 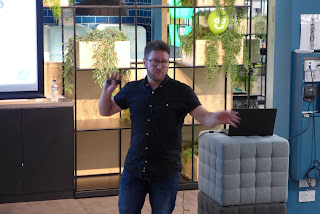 Next up was a lightning talk from Craig, AO's product designer about the "double diamond" design process. I'll not try to explain it myself as the talk was delivered at a pretty rapid pace and I was busy taking photos of the slides but really should have been paying more attention to what he was saying! (note to self: take less photos, listen more intensely). However the double diamond design framework is explained very nicely on the British Design Council's website. One thing that I didn't miss was Craig's fun but relevant use of various Beatles songs to describe the different stages of the design process.

Then it was time for food, drink and some networking. The food was a delicious curry with naan breads and pakoras, all really tasty!

How to create, build and sell a successful FinTech startup - Muhammad Asim 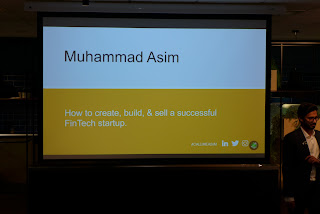 The final talk from was Asim the CEO and Founder of Marq Millions. He started in business aged just 17 with the family money exchange company, by 21 was running his own events company. By 24 moved to the UK to fulfil his father's dream of a founding a UK bank, by 28 launched a FinTech company and by 30 sold it! He was an inspirational presenter and I loved hearing his story about the good and the bad bits, I've tried to capture some of them below but I don't feel it really does the talk justice at all! 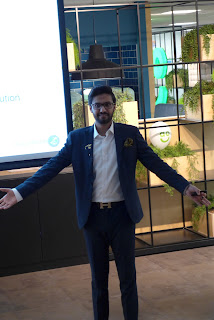 His aim for his FinTech company was to be able to open a full bank account (Arro) in under three minutes whilst adhering to all the stringent UK banking rules and regulations. He regretted not having multiple investors from the start, instead he took money from his mum whereas external investors would have provided advice and guidance as well as money.  Due to his background in finance he thought he could be the CFO as well as the CEO, this spread him too thin and he regrets that decision now. He also said that it's very important to choose the right partners rather than the first one that shows interest, they wasted six months whilst this partner delayed things and had to break the partnership in the end. 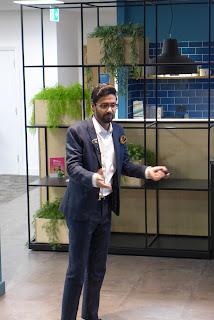 He also talked about the importance of creating a brand for yourself so that people recognise who you are and what you are about. PR is fundamental in getting the message out about your product, even if your product is amazing, if no one knows about it you won't be selling anything.

I truly inspirational guy and really down to earth, I hope I get to see more presentations from Asim in the future. 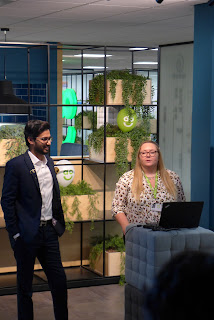 Thank you so much to Bethany Procter, Project Manager at AO who MC'ed the evening and thanks to AO for hosting the event and providing the drinks and the lovely food (ordered from Simply Delicious).  Really looking forward to more North West Tech Talks in the new year!